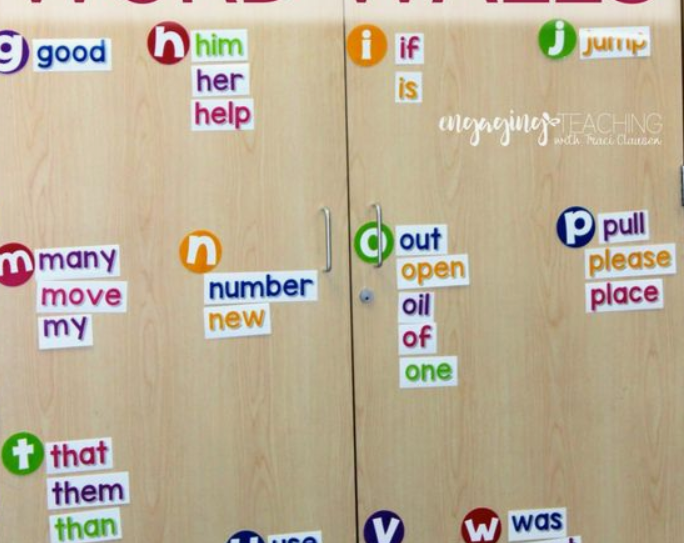 This post was first published in 2020 and is now re-released with revisions.

‘Environmental print’ is something that we have heard about forever and there are many different ways to look at this concept.

I have seen environmental print placed around a room with the hope that children will ‘pick up’ the words and be able to use them for a variety of purposes.   This might take the form of labels around the room or lists of words placed on the wall by the teacher.

I have also seen word walls arranged by letter, somewhat like a dictionary.

‘Sight words’ are often a feature of word walls.  You can read about my view of sight words here

Word walls might relate to a particular learning area

Or be made up of words that you hope your students will use.

The thing that I have noticed about all of these examples is that every one of them is a printed and laminated resource that the teacher has likely placed on the wall before or after school.  These displays seem more decorative than interactive (despite often being identified as such). The teacher spends hours in front of the television laminating and cutting and then another hour putting things on the wall. The children then glance at the display every now and then, hardly noticing the purpose the teacher intended when putting all that time into the work.   If you are now wondering how much your children are getting out your hard work in putting up displays, take note of what happens if you don’t mention them.  Ask your children to stand with their backs to the wall and tell you about what’s on it.

Where does it all go wrong?

Word walls are often put up to provide a resource for children to be able to copy words they don’t know how to spell. The idea is that with enough exposure to the words the children will remember how to spell them, but I have seen this go very wrong for our most vulnerable children.  Instead of developing the skills they need to make decisions about spelling based on phonics, morphology and etymology, they learn that words are something you copy, not write yourself. Children are then so reluctant to write for themselves for fear of making an error, that they are crippled by the writing process. They never develop the automaticity of segmenting and transcribing that is necessary for effective writing.  This is exacerbated by a lack of effective phonics instruction which results in memorisation and copying becoming the sole methods of spelling. Stanislas Dehaene reminds us that 'exposure' usually only leads to things reaching our sensory memory where they sit for a moment and then disappear. In order for really great learning to occur, children need to have their attention explicitly directed to what is important, become actively engaged with the materials, receive corrective feedback while they work and the have the opportunity to consolidate what they learn. You can read more about these 4 Pillars of Learning in a previous post.

While the act of putting things up on the walls is unlikely to cause children any damage, it’s the way that these displays are used that makes all the difference.  We all want our classrooms to look nice, but the drive for Pinterest Perfect classrooms can lead to us leaving the most important part of the picture out – the kids!  I have a preference for cumulative displays that are created WITH children as part of the learning process.  The display then becomes a record of learning for children to refer to and becomes a review tool, rather than a copying one.  These displays are not pretty. They aren’t laminated. They WILL be written in a range of (often messy) handwriting styles but they will be meaningful to children.

In recent years, the idea of sound walls has really taken hold. This involves arranging words according to phoneme instead of grapheme and can be a really great way to make the alphabetic code explicit.

These days, a sound wall is more likely to look like the one below (Thanks Steph Le Lievre!) than the one above, but essentially, the idea is the same. The challenge that I see with sound walls is that many teachers still treat them like environmental print, thinking that just having them on the wall makes things better. It might, but only if it's part of a systematic, explicit approach to teaching the alphabetic code.  I'd still recommend treating a sound wall as a cumulative display of learning that is co-constructed with children during instruction rather than used as a decoration hoping that children will learn from it.

You can read more advice from Steph about sound walls here.

The central message here is that there is a difference between decoration and purposeful recording of learning displayed on the wall.  I’d love to see examples of your classroom learning displays. To share your pics, please pop on over to my Facebook group and inspire others!

If you would like to find out when the next blog post is published, simply subscribe below. I would love to hear about your own experiences in teaching. Please feel free to share in the comments box below!

It's very good to show a record of learning and the children's engagement but this is missing out the way visual display can provide for both 'teaching' and 'learning'.

The work-in-progress wall with children's own labelling is definitely meaningful for the children but their handwriting in this way does not provide easy-to-see, easy-to-revisit, easy-to-prompt and remind, content.

Display does not have to be an either/or scenario, but it does help to reflect on what goes on the precious wall space.

When it comes to 'words', we're focusing in phonics, reading, spelling, vocabulary enrichment, and building up knowledge of spelling word banks (words spelt with the same letter/s-sound correspondences) - and we need to be mindful of teaching and learning - and constant usefulness.

What goes on the walls does need some discussion and professional development so it's great that you are drawing attention to this topic.

Thank you for the examples.

As a Prep teacher I find the example of student work is more meaningful to them and they are proud of their work being displayed and are encouraged all students are encouraged to offer their meaningful learning for display.