Version 9 of the English Curriculum Has Landed

The new Australian Curriculum is out and there is some exciting news.  The words ‘predictable texts’ and ‘combining contextual, semantic, grammatical and phonic knowledge’ are now gone.  Other worrisome phrases such as ‘visual memory’ have disappeared from the year 1 descriptors that relate to reading and writing high-frequency words.  These changes reflect the growing understanding of how we learn to read and are to be celebrated.  No longer will we have to try and counter arguments in favour of  levelled readers or three cueing strategies that are based in the fact that they are mentioned in the Australian Curriculum.  There will still be arguments made, but the curriculum will no longer be a part of that.

Firstly, when people say that it is a ‘pared back’ curriculum, as far as English goes, they aren’t talking about content.   There are slightly fewer content descriptors in Version 9, but not much has actually been removed.  Several content descriptors have been combined. When you look at what has been combined, you will see that it made sense to do so.   In terms of content, it’s much the same as Version 8.4.  The good news in that is that primary teachers don’t have to reframe the entire teaching and learning focus of their English teaching. There are different codes attached to the descriptors, but you can rest easy that your past planning in years gone past will not be wasted.

What has changed, I am pleased to say, is that many things are a bit more direct. One of the biggest implications for us is that it will be easier for us to understand what the curriculum is asking from us. This has been achieved in a few ways.

Firstly, the descriptors/descriptions themselves are mostly more specific. The word ‘understand’ appears far less often. Instead, there is a greater focus on what students will do. Words such as ‘explore, identify, recognise, share, respond, interact and retell’ make things much clearer.

Here is an example from Year 1.

Version 9 – Discuss plot, character and setting, which are features of stories AC9E1LE03 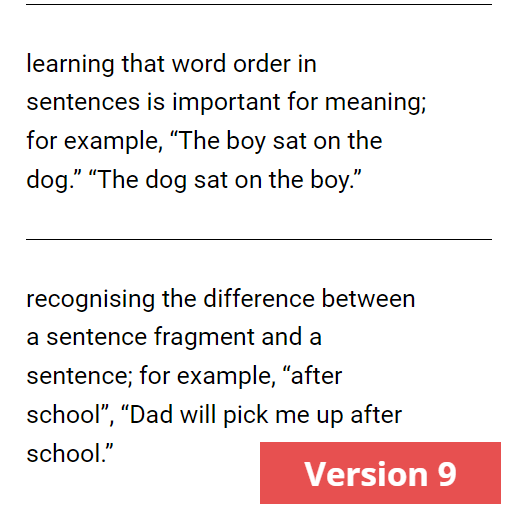 Thirdly, achievement standards appear to better reflect current classroom practices than the old versions did and are more specific.

When reading, they use knowledge of the relationship between sounds and letters, high-frequency words, sentence boundary punctuation and directionality to make meaning.

Has been replaced with

They blend short vowels, common long vowels, consonants and digraphs to read one-syllable words. They read one- and two-syllable words with common letter patterns, and an increasing number of high-frequency words. They use sentence boundary punctuation to read with developing phrasing and fluency.

The structure of the achievement standards has also changed. The structure of Version 8.4 of receptive and productive modes have been replaced by three distinct paragraphs, that while not labelled as such, clearly relate to oral language, reading and writing.

One other change to note is that the content descriptors that deal with students learning word level knowledge and reading has moved from the 'Language' section to the 'Literacy' section. This change is more in-line with the way that many of us run our literacy blocks.

In reviewing the English curriculum from Foundation to Year 6, these changes are consistent. Overall, Version 9 presents us with a more slightly direct outline of what it is we need to teach in English. If you were hoping for less content, more explanation of the specifics of content (phonics knowledge, morphology knowledge, reading rate etc) or an indication of how English is to be taught, you won’t find it here.  Each state and territory, and indeed each school, will still need to work that out for themselves.

To help you put these new achievement standards to work, I have created a series of 'I can' statements based on the standards for Foundation to Year 2.  You can download them, and the grading guidelines below.

This is a brilliant guide/explanation to a somewhat complex curriculum. Thank you for the extra effort you put in.  It is very much appreciated.

Super helpful, are you planning on creating I can statements for years 3-6?

Will you be doing the same for years 3-6?

Will you be doing this for Years 3-6 by any chance?